The Bookcase Of Fear #2: Paul Magrs' Never The Bride

Never The Bride
By Paul Magrs 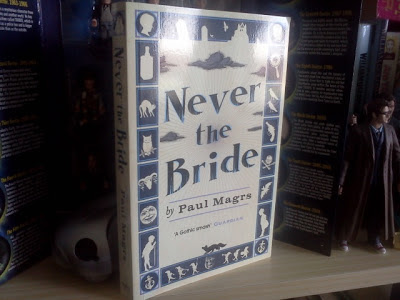 I have a fraught relationship with this book.  I nearly read it half a dozen years ago, but one glance at the blurb made me put it down.  This is not because it sounded bad.

Throughout college, I found that every time I had a good idea for a story, Terry Pratchett had managed to do it first.  I don't know what methods of eavesdroppng and time travel the man employs, but he is RELENTLESS and he is EVIL.  I ended up calling it Pratchett's Law: whatever great idea you've had, you're too late, Terry Pratchett did it.  And at one point, I had the idea to write a novel about a mysterious seaside town filled with monsters and oddity.  Then I saw Never The Bride by Paul Magrs, who wrote a really excellent Doctor Who book called The Scarlett Empress.  (It's really good, like a proper book, with characters and everything!)  One glance at the blurb reveals that Never The Bride is about a seaside town containing monsters and oddity.  Oh, joy!  And it's covered in critics' praise for how original it is.  Joy-filled happycakes!

Years later, I got the book for my birthday.  I guess it's time to set aside sulking and my own stupid laziness for not writing the damn story already, and see what Paul Magrs did with a similar concept.  And the answer is... something fun, but not quite world-beating.  (I'm not crazy about the title, either: friends and co-workers insisted that I must be reading "a girlie book".  Well, yes, there are women in it I suppose, but... shut up!  It's about monsters!  The Princess Bride must have enjoyed similar cultural misunderstandings.)

Never The Bride consists of five long-ish chapters about Brenda, a mysterious woman running a Bed & Breakfast, and her best friend Effie, a (very) amateur witch who runs the junk shop next door.  They live in Whitby, a sleepy seaside town (grrr!) where little happens.  Each chapter is more like a short story than a piece of the whole; I occasionally wondered if Magrs had begun by writing brief tales about Brenda and Effie, and had been convinced to call the end result a novel.  The constant re-setting of story is a little disquieting, as it means the book never builds very much momentum, and seems at all times to be in a hurry.  This isn't all bad – it ensures that Never The Bride races along, and it's always encouraging to find yourself devouring a book at speed.  But it does mean that when the book ends, it really just stops, after an alarmingly sudden ten-page finale that sets up future books in the series.

I wanted more.  More depth for Effie in particular, who loses out to our first person narrator and is, quite frankly, not likeable for the most part.  Brenda is at least a fantastic character: mysterous and remarkable, reassuringly imperfect, she retained my sympathy throughout.  She has a secret, of course, and I regrettably learned it before picking up the book.  If you're thinking of reading this, and you should, then I implore you – do not read Paul Magrs's Wikipedia page!  It contains a whacking great spoiler about Never The Bride and its sequels that I wish I'd missed.  Some things you're better off finding out at the right time.

It's hard to discuss the story events without giving away the book's surprises, so suffice to say, Never The Bride is a charming tribute to various oft-told stories, and it puts a new spin on all of them.  It's fun and it's worth reading, although it won't take very long and you might wonder if there could have been a longer, more substantially tied-together version at some stage.

Fortunately for me, it's not that close to what I had in mind, so now that I've faced my demons – which turned out to be Paul Magrs – I suppose I ought to get on with it...
Posted by Neil Is The Best Dalek at 10:49 1 comment: