The Bookcase Of Fear #3: Neil Gaiman's Neverwhere (Plus A Few Others) 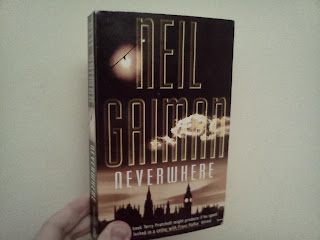 Here's an author cloaked in considerable hype.  Geeks love Neil Gaiman: he's inspired two hit movies (one of which I like), and has become a regular big name in Doctor Who, already having at least one fan-favourite under his belt.  (Another episode, not a fan-favourite, may be concealed somewhere darker.)  It's about time I read one of his books.

Neverwhere, if you don't know, concerns a mysterious London underworld called London Below.  It's an invariably unpleasant, but quite imaginative place where seemingly everyone is out to get everyone else.  Our hero, a crushingly ordinary man called Richard Mayhew, finds himself embroiled in it when he helps an injured girl called Door.  She's being pursued by a murderous double-act, Mr Croup and Mr Vandemar, presumably because of her (unsurprising?) knack of opening doors.  Thanks to this small act of kindness, Richard's life in "London Above" is quickly erased: he must go with Door, acquire allies and, if possible, avoid death.  And you can hardly move for death in London Below.

Gaiman's underworld is a work of occasionally impressive imagination.  If anything, there's not enough time to explore it: having now finished the book, I'm still not entirely sure I get it.  It's a sort of medieval society featuring fantastical monsters, pockets of time (and a few people) from long ago, with numerous creative (and/or literal) interpretations of London landmarks.  Earl's Court has an Earl in it.  There's an Angel called Islington.  My favourite was Knightsbridge: by far the book's most intriguing and haunting concept.  But, back up – what's all that pockets-of-time malarkey?

The people are not quite as rich as this world.  Richard is dull as a bucket for most of it, eventually going through the traditional you-can-never-go-home-again rite of passage.  His vaguely romantic relationship with the vaguely spunky Door goes – spoilers!– nowhere in particular.  Perhaps it's an attempt to avoid cliché, which surely dictates the Man must fall for the Woman; either way, it's a flat ending when he doesn't.  The anti-heroic Marquis de Carabas is obviously a character Gaiman is proud of, and quite right, as he's the brightest spark here.  The villainous Croup and Vandemar, also clearly relished, are comparatively one-note.  They flog that well-spoken-thug caricature you've seen in most of fiction's criminals until it whimpers.

The plot isn't much more than the sum of its parts.  A sort of grimy Wizard Of Oz, our heroes trek through London Below to find assorted baubles and seek help from a magical figure.  When the villain is finally unmasked and his evil scheme laid bare, things quickly reduce to the lowest bad-guy denominator, with ranting and maniacal ambitions and evil-just-for-the-sake-of-it.  (Plus a plot point bizarrely reminiscent of a Doctor Who story from 1987.  Not a good year.)  All of this is a pity, because there's real imagination splashed throughout Neverwhere.  Sometimes, splattered.

I didn't realise Neverwhere began as a television programme.  (I thought it was the other way round.)  This makes sense in hindsight: all those moments where Richard stops to (mentally) recap the action practically scream "Last Week On Neverwhere."  It's understandable, though unfortunate, that the action feels a bit episodic: certain twists, especially a death followed by a return from the grave, might work better with, say, a week of waiting in the middle.

It seems I don't have many nice things to say about Neverwhere.  That wasn't my intention.  It is an absorbing read, with a few bright ideas.  It's just a shame the narrative built to contain them is so perfunctory.


I've read other things recently, but didn't get around to reviewing them fully.  Here are a few thoughts on...


Thank You, Jeeves
By P.G. Wodehouse 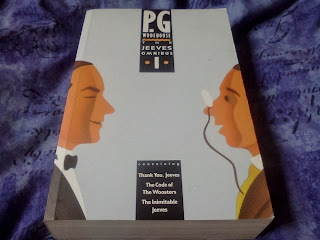 All right, then, Wodehouse: where exactly have you been all my life?  I was several sentences into Thank You, Jeeves when I realised this was something I was not just going to like, but probably going to love.  Virtually every word of it is funny; the dialogue races along beautifully, of course, but the prose itself (from the perspective of the delightfully idealistic-but-dim Bertie Wooster) is so much fun, I wanted to dive into the book and swim in the words.  Curiously, despite the amazing reputation of Jeeves, it was Wooster who impressed me most.  Perhaps one of the finest Flawed Narrators I've ever come across, his personality bounces off the page.

The plot is that sort of finely-tuned farce (with people getting engaged, identities being mistakes and so on) that Noel Coward and Oscar Wilde were so adept at, except Wodehouse seems more concerned with having fun that appearing clever.  As such, I enjoyed this a lot more.

If the book has a drawback, it's the very dated racial terms.  I thought I'd copped the worst of it just hearing people drop the N-bomb as if it were perfectly normal, but it's later a plot-point that people are frightened out of their wits by black people, casually mistaking them for ghosts or monsters.  I'd be lying if I said these bits didn't make me want to curl up and shiver with embarrassment.  Strike One, Wodehouse.  But everything else was perfect. 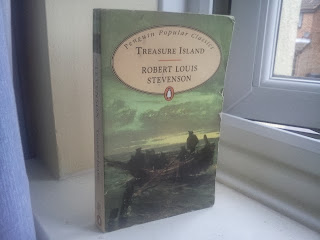 Just like A Christmas Carol, this one's so colossally famous you can barely separate it from its influence on pop culture.  In other words, it's difficult to read it without imagining the endless adaptations.  (Yes, including the one with the Muppets.)

Still, it's a rollicking adventure with some highlights I've yet to see realised on-screen.  Jim's fight to the death with one of the mutineers, for instance, is darker than what I've seen in the movies.  Meanwhile, certain moments have been enhanced: Flint's murderous crew are more inept and useless in the original tale, Jim's infamous friendship with Long John Silver is mostly a film invention, and the curiously pointless first mate, Mr Arrow, really was put to better use by the Muppets.

It's silly to blame a book for things the films did differently; nitpicking aside, it's an obvious gem.  Read it if you haven't. 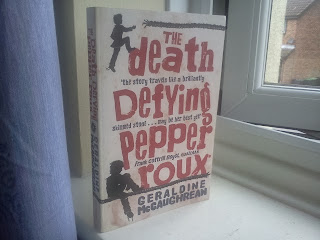 An intoxicating and whimsical fantasy about a boy destined (according to his very strange aunt) to die on his next birthday.  Young Pepper decides he'd really rather not, and hops from one assumed identity to another, touching people's lives in oddly bittersweet ways and visiting a lot of rich French locations.  This conjures the sort of fantasy you'd see in Amelie or Hugo (although it is much better than Hugo).  I did feel a little let down by the resolution, which isn't nearly as fantastical as I'd hoped; however, as the blurb promises, the journey there is certainly rewarding.

I, Partridge: We Need To Talk About Alan
By Alan Partridge 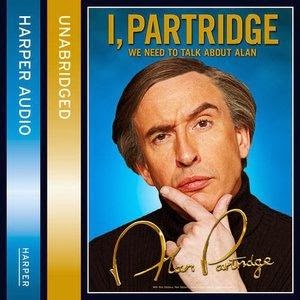 I was a little wary of joke autobiographies since reading Rik Mayall's Bigger Than Hitler, Better Than Christ, which never surpassed its title.  This effort from Alan Partridge (and co.) is far more consistent and a lot funnier.  Particularly skilful is the way Alan "edits" certain events (either in Knowing Me, Knowing You or I'm Alan Partridge) to make himself look better, being somehow oblivious that his fans can readily go and see for themselves, or perhaps genuinely deluded about what happens to him.

I heard the audiobook version of this (read by he, Partridge), and can recommend it enormously.  I'm sure it's hilarious as an actual book, but it'll be difficult to top the self-deluded pomposity of Partridge delivering this tale of heroism, heartbreak and nosebleeds himself, directly to your ears.
Posted by Neil Is The Best Dalek at 11:19 2 comments: