But coming right after the loathsome A Good Man Goes To War, which asked a lot of questions, dropped a bombshell and left us hanging for two months, terrified the Doctor was a... well... y'know*, Let's Kill Hitler is poorly timed.  We want answers, not Carry On Up The Third Reich.

Inappropriate timing is part of the joke, because you weren't expecting it and anything you weren't expecting is therefore clever.  (Ditto funny.)  You'd never expect to see the quest for Amy and Rory’s daughter, the truth about River Song, a Terminator and Adolf Hitler in the same story.  (Although you do now expect Moffat to leave a big gap between cliffhanger and resolution, or just skip the latter entirely, because he keeps doing it.  The whole point of a cliffhanger is how the characters get out of it - skipping the next few moments robs the viewers and makes the writer look like he either couldn't get out of it, or couldn't be bothered.  Do it often enough and you just stop caring.  Oh, he didn't bother.  Again.  What happened next?  Your guess is as good as ours.)  The plot's eclecticism is played for laughs, along with everything else, but cut the Hitlery Terminatory baggage and it's actually a really important episode.

It's River's big day, the moment where she meets the Doctor for the first time.  Make a tick in your blue diaries, everybody.  Except… it's not what she said happened in The Impossible Astronaut.  And her brand new back-story, growing up alongside Amy and Rory as their best mate Mels, hasn't been set up at all**.  How hard would it have been to mention Mels just once before this episode?  Seriously, we get nothing?

(And hang on... if Mels has been there all along, how has she only just caught up with the Doctor?  He’s been to Leadworth loads of times.  Summoning him is now so easy you can do it with a Mini Cooper and a crop field, so what's she been doing all this time, besides not going to weddings?)

Said back-story is a sneaky attempt to tie up the quest for Melody as quick as possible.  'You got to raise me after all!' declares Mels.  Oh well, that’s okay then.  Phew, Amy and Rory, you can relax.  (Actually, Amy and Rory are already pretty relaxed.  They don’t seem that fussed about the abduction of their newborn baby, or about Mels becoming a psycho killer, or about the Doctor counting down to their prime dating years***.  Maybe it’s because they missed the entire pregnancy, so haven’t really got it into their heads that they even have a child.  Oh well.  Fascinating drama it isn't.)

Sorry guys, it doesn't work like that.  Not only were the three of them growing up together, and thus not raising anybody, but Amy and Rory never knew who Mels was, and apparently had no effect on her as a person.  No biscuit, Mr Moffat: this is not an okay way to resolve the story.  It's cheaty, fingers-crossed, change-the-rules swindling, and we've come to expect... well, this really.

As soon as a gaudy sports car hurtles into the episode, we assume River has arrived.  Who else could be this nauseating without even being on screen yet?  But no, it’s someone new, although just as irritating.  Gun-toting, eyebrow-raising, quip-flinging Mels is one of those characters you're clearly meant to love purely because the writer thinks they're great.  Alas, characterisation is about more than sassy one-liners and other characters telling them how zany and cool they are.  Mels falls flat on her smug face.  How could she not?

Thank God Mels is River.  That way, these two revoltingly smug characters can’t meet, which would surely cause the TV to melt.

Which brings us to the most loathsome person in the episode.  No, not Hitler. 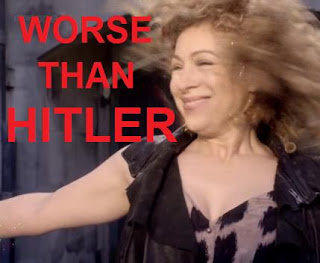 Well, that is literally what this episode tells us.  Those tiny people stop their mission to punish Hitler so they can take out Melody Pond.  Seriously?  River Song is a bigger war criminal than Hitler?  For killing one person?  That's right kids; World War II and the Holocaust are not as bad as no more Doctor Who.

You're clearly meant to love River, or she couldn't get away with all those one-liners and giggles, but you can't just tell us to love a character.  River's ‘charm’, her mystery, her superiority over and love for the Doctor are entirely unearned.  The writer says she's awesome (or has been or will be), the Doctor agrees and that's the end of it.  All that's left for Alex Kingston to do is to ratchet the sass and the va-va-voom up to 11 and listen for the obedient 'Squee!'  Each new appearance increases our desire to see her dive into a woodchipper.

At least we learn a few things about her, although for an episode of answers, this still leaves us with more questions than ever.  Most of them formed from the word 'huh?'  We learn how she can fly the TARDIS, why she's called River (even though we learned a different reason for that last episode), why she took up archaeology and even why Alex Kingston ages in the wrong order.

Each answer is very knowing and smug, and hence not very satisfying.  Every time Moffat explains something, it feels like cheating.

And speaking of 'knowing' and 'smug', how about Hitler?  It's a deliberately jokey title, the inclusion of Hitler in the story is a joke, and the fact that he's bundled out of the story within three minutes is an even bigger joke.  The fourth wall doesn't know what hit it: every line of dialogue featuring Hitler comes with an implied exclamation mark.  It's Hitler!  Hitler's a lousy shot!  I'm putting Hitler in the cupboard!

Those of us who thought Victory Of The Daleks was a gross simplification of World War II now have distinctly eggy faces.

Although some of us enjoyed that one.  Weeee, spitfires in space, narrrrrrnarrrrrr jujujujujuju!

What else do you expect?  It’s Hitler.  You have to laugh.  If Doctor Who dealt with actual historical horror, you’d get The Fires Of Pompeii, or God forbid, The Myth Makers.  Look, they all die and the Doctor helped it happen.  Er… thanks.

So what of the Terminator?  The Tesselecta is a shape-shifting robot filled with miniaturised time-travelling policemen.

It could have been neat if, again, it didn't just go for laughs.

You expect me to take a Beano comic strip seriously?

The crew have silly dialogue, their improbably homicidal service robots are silly, and everyone falls over when the thing moves, like they're on the Enterprise.

Considering how fun this idea is, I found them all boringly serious.

These tiny people are rubbish at their job.  If they only punish people at the end of their established timelines what’s with the Nazi they 'clean up' and 'leave to the antibodies' at the start?  They kill him without checking how long he’s supposed to live, surely messing up the timeline.  And how incompetent are they that they’ve only just noticed they’re seven years too early to get Hitler?  Whoops.  And why do they even need the 'antibodies' to kill unauthorised visitors?  No one can get in unless they miniaturise them.

Moffat could have paralleled their mission with the Doctor's; after all, he zips around righting wrongs, so do they to a fashion, with the Doctor often getting even more deadly results.  Isn't that worth mentioning?  Alas, Moffat's got his funny on, so the episode just doesn't stop there, just as the controversial concept of killing Hitler and potentially creating a much nicer timeline is never even acknowledged.  Waste.

Yeah, but then it would be Red Alert.  I enjoyed the Doctor’s reaction to the Tesselecta.  His shocked line 'You got yourselves time travel so you decided to punish dead people?' is very decisive.  These are stupid, bad people.  I didn’t need a parallel.  After the previous episode, I’m sick of the Doctor being compared to a warmonger with a God complex.  Yes, he goes around judging people when he has no right to, but stop pointing it out.  It’s a flaw in your show, not something clever to discuss.

Normally you cling to Matt Smith, whose performance is a constant highlight in weaker episodes but the Doctor in Let's Kill Hitler is totally uninspiring.

He's in comedy mode, shouting most of his lines and he treats his impending death like an excuse to try out his wobbling, gurning skills.

Oh oh oh!  While Smith is uncharacteristically dull for the first half of the episode, once the Doctor is poisoned, his performance turns GOLD.

As for his premature death, they've got to be having a laugh.  In a series that hinges on his definite and unchangeable death happening somewhere else, we're supposed to worry about him copping it here?

Also, the ultimate weapon against the Doctor is a Time Lord?  The one thing in the universe with enough power to bring the Doctor back from death?  Is this not, perhaps, the worst weapon you could possibly use against him?  Besides which, the Judas poison (thought we were done with the God references, sigh) is obviously the ultimate weapon, not River (regeneration disabled?).

Still, lipstick makes a pretty good Doctor-killer, given that he's kissed most of the women he's met.  The Silence did their homework.

As for Amy and Rory, or Mr and Mrs Let’s Just Hug And Wait For Death (Ian and Barbara were never this pathetic), they just accept the loss of their baby to a torturous upbringing full of loneliness and brainwashing, knowing she'll grow up to be a psychopath with more than one death to look forward to****.

But never mind that.  It's Hitler!  In a cupboard!

***The Doctor cares more about River than they do, which suggests it’s because he fancies River, rather than this is an abducted child.  So when the Doctor says ‘You know who she grows up to be, so you know I will find her’ and ‘As first dates go, I’d say that was mixed signals’ why are they not horrified?  At least Rory should be.  So you stole my wife and now you’re taking my daughter?  He punches two Nazis this week; PUNCH THE DOCTOR.

To pass the time until tomorrow, here's Neil.

Trying to improve the Daleks' Sky signal.﻿
Posted by Neil Is The Best Dalek at 19:21 No comments:

Neil Is The Best Dalek

What? You mean the 24 hours we spent coming up with the title wasn't enough? We're supposed to write actual posts?

Okay, so, welcome to Neil Is The Best Dalek. So-named in honour of the unappreciated Dalek who's usually loitering at the back wielding a largely unnecessary drinks-tray attachment instead of a sink plunger.

This is a review blog for geeks. There are two of us writing this thing,

So it's completely possible to just, say, hijack what the other one is writing in a really annoying way.
and we don't always agree. So it'll be kind of like a normal review site, except it talks to itself.

We're always watching movies, sometimes we watch TV, we own far too many DVDs, and there might be a few news items and ramblings into the bargain as well.

Excited yet?
First review will be Doctor Who: Let's Kill Hitler. It's on BBC1 tomorrow at 7.10pm. It will probably suck.

The episode, not the review.
Posted by Neil Is The Best Dalek at 18:45 1 comment: